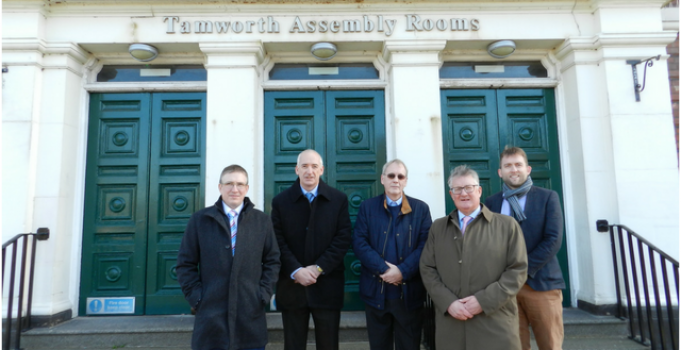 A multi-million pound project to transform Tamworth Assembly Rooms into a modern theatre fit for 21st century audiences is about to get under way in earnest, with construction work due to start in the next few weeks.

Although much work has been carried out internally to survey and prepare the Grade II listed building for its £4.8m makeover, the construction phase of the project can now finally begin.

The £3.38m building contract to refurbish, extend and modernise the 128-year-old theatre has been awarded to Novus Property Solutions who will be working as part of a project team made up of architects, engineers, quantity surveyors and a project manager.

Novus Property Solutions is an award-winning property maintenance, refurbishment and new build contractor based in Stoke-on-Trent which has a history spanning back almost as long as the Assembly Rooms building itself.

The firm’s task includes modernising and extending the building including the creation of a café bar and exhibition space, a new box office, glazed double doors at the front and a brand new glass extension on the side of the building, which will be used as a studio space.

The theatre’s windows – which have been covered over for a number of years – will be opened up to allow natural light into the auditorium and to complement the new glass frontage to Corporation Street.

Accessibility will be enhanced with a new access ramp outside and an improved layout throughout and the current tiered seating will be replaced with new state-of-the-art retractable seating to create a contemporary and flexible theatre space. Back stage areas will be improved for performers and the building will be decorated throughout.

Although the theatre is being significantly refurbished and updated, its ornate historic features will be conserved.

Tamworth Borough Council’s Cabinet member for Regeneration, Cllr Steve Claymore, said: “It’s great news that the building work can finally get under way in earnest. It may feel like it’s been a long time coming, but lots of statutory investigation and survey work has taken place behind the scenes, along with the tendering process, design work and everything else that had to be put in place before work could start.

“We are dealing with a very iconic and historic building and this project represents a significant investment in its future for the people of Tamworth and beyond to enjoy, so it’s important we get it right.

“That being said, we are now entering a very exciting phase of the project and I’m really looking forward to seeing the transformation taking place. Novus Property Solutions is an award-winning company with a strong track record and I’m confident they will be able to deliver a new theatre that the whole town can be proud of.”

The Assembly Rooms refurbishment is part of the wider Enterprise Quarter project, which is a joint initiative between Tamworth Borough Council and Staffordshire County Council.

The overall £6.1million scheme includes the creation of Tamworth Enterprise Centre, a new restaurant in the Carnegie Centre and ‘public realm’ open space. It is being funded by the Stoke-on-Trent and Staffordshire Local Enterprise Partnership’s Local Growth Fund (£2.95m), the Heritage Lottery Fund (£903,400), Arts Council England (£365,000) and the remainder from Tamworth Borough Council.

LEP chairman David Frost CBE said: “The refurbishment of the Assembly Rooms is an important step forward in the transformation of Tamworth. Creating a vibrant and attractive town centre will increase visitor numbers, boost the local economy and create jobs, benefitting both Tamworth and the wider area.”

Novus will imminently begin setting up the site and carrying out asbestos surveys of the building. They will then start making preparations for the new extension, which has been designed to complement the existing character of the building.

The construction phase is expected to take around 14 months and this will be followed by further internal and technical work. If all goes to plan, the theatre should reopen during 2019, but further updates will be issued as the project progresses.

Dean Povey, operations manager for Novus, said: “The Assembly Rooms are an iconic part of Tamworth’s history and landscape. We’re looking forward to working closely with Tamworth Borough Council to bring the theatre up to date for the 21st century while ensuring it remains true to its heritage. Our team are all highly experienced in working with historic listed buildings like the Assembly Rooms and are committed to delivering a high quality of finish.”

Other members of the project team include Brownhill Hayward Brown Architects, who have worked on the designs for the landmark building, Keelagher Okey Klein quantity surveyors, Cundall structural engineers and mechanical and electrical engineers BWB Consulting.

The whole project is being managed by Rider Levett Bucknall UK.

Adam Ellis-Morgan, managing partner of project managers Rider Levett Bucknall Birmingham, said: “Tamworth Assembly Rooms plays such a vital role in the town’s history. It’s iconic for most residents. Working in partnership with Tamworth Borough Council, Novus and the whole project team, we’re helping to shape the future of this key heritage building and reviving it for the 21st century. Through project-managing the whole re-development, our goal is to revitalise the Assembly Rooms to their former glory.”

Adrian Mathias, Director of BHB Architects, said: “We very much look forward to starting this project with Novus and seeing the proposals take shape on site. Tamworth Assembly Rooms hold so many memories for the people of Tamworth and wider Staffordshire and it’s great to be part of the push to bring this building into the 21st century with the improved and extended facilities that are proposed.”