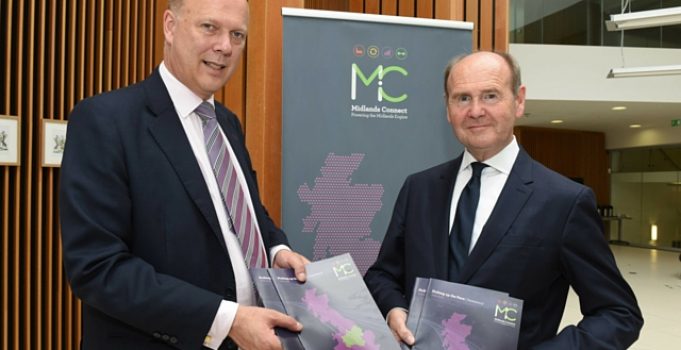 Mr Grayling was in Derby for the launch of a report by Midlands Connect, the private and public sector partnership, including Stoke-on-Trent and Staffordshire LEP, which has been tasked by the Government to develop a transport strategy to power the Midlands Engine for Growth.

The partnership’s Picking up the Pace report sets out a case for accelerating the planning and design stages of key transport projects in the Midlands so they can be built during the first half of the 2020s.

The report, launched at Derby City Council House, says starting development work on the schemes now will enable the Midlands to have them in place to reap the maximum economic benefits possible from the forthcoming HS2 high speed rail line.

Research by Midlands Connect has also shown that speeding up journey times across the Midlands can boost the regional economy by £1 billion a year and create 300,000 new jobs.

Mr Grayling, who made a keynote speech to dozens of business and political leaders from across the Midlands, said: “Good transport helps people get around and get on and is crucial to driving economic growth. That is why the Government is heavily investing in transport across the country, spreading opportunity and growth and bringing our country closer together.

“With its position at the heart of the UK, the Midlands is vital to the country’s success and I want the region to speak to Government with one voice on its future transport priorities. Midlands Connect is making great progress, building evidence of the region’s transport needs and bringing real momentum to making the Midlands an engine for growth. I look forward to working closely with Midlands Connect and seeing the proposals in the final strategy.”

Sir John Peace, chair of Midlands Connect and the Midlands Engine, added: “The Midlands is in an increasingly competitive global market and to stay competitive we need affordable, fast and direct transport to deliver our people and goods to where they need to be.

“As the nation’s manufacturing heartland we generate £240 billion a year towards the UK economy and are at the very epicentre of the nation’s transport networks. So what benefits the Midlands benefits Britain.

“But we need to pick up the pace in terms of how we go about planning for the future. Unless we have the right kind of forward planning in place we will not be properly ready to meet the challenges that lie ahead or to make the most of HS2 and the rail capacity it releases.”

Since its launch in October last year Midlands Connect has been working closely with Network Rail and Highways England to identify proposed schemes that can unlock economic growth and network capacity and should be prioritised for planning and design work.

Two projects in particular, both aimed at tackling the national road and rail network bottlenecks centred on the Midlands, are highlighted in the report – the Midlands Rail Hub and the Midlands Motorways Hub.

The Midlands Rail Hub includes several interlinked projects to free up capacity on the existing rail network. This will enable up to ten extra train services an hour into central Birmingham improving connectivity right across the Midlands and the rest of the UK.

The work would potentially provide faster, more frequent rail services into and between cities such as Leicester, Derby, Nottingham and out to Lincoln in the east, Shrewsbury, Worcester, Wolverhampton, Stoke and Stafford in the west and Northampton and Milton Keynes to the south.

Picking up the Pace also calls for a study into proposals for continuous hard shoulder running on the M6, M5 and M42 hub in the Midlands to gauge how effective this would be in tackling congestion at what is a notorious bottleneck on the national road network.

Both projects will be among a number of schemes to be included in the Midlands Connect transport strategy due to be published in March 2017.

With exports of £50 billion a year – 16 per cent of the UK total – the Midlands has a strong mix of high-growth industries, including logistics, advanced manufacturing and professional services. It is also the nation’s manufacturing heartland – home to a third of all UK jobs in that sector.

It is for these reasons that the Government has identified the Midlands as the UK’s ‘Engine for Growth’ and for being pivotal in the rebalancing of the UK economy as a whole.

This vision of a ‘Midlands Engine’ sets out a vibrant and growing economy focused on productivity – one that can deliver more jobs, exports and an improved quality of life. It is driven by getting the most out of the Midlands’ workforce, research and transport.

The long-term strategic transport plan being developed by Midlands Connect aims to power the Midlands Engine to not only unlock growth and jobs but also tackle the significant transport challenges that are already impacting on the competitiveness of both the Midlands and the wider UK economy.

In March this year the Government made a commitment to put Midlands Connect on to a statutory footing by 2018.

The Picking up the Pace report sets out a roadmap for Midlands Connect to become a Sub National Transport Body overseeing pan-Midland transport policy and strategy, making a clear case for gaining continued support from the Government.

A full copy of Picking up the Pace can be viewed at https://www.midlandsconnect.uk/media/1071/putpr.pdf