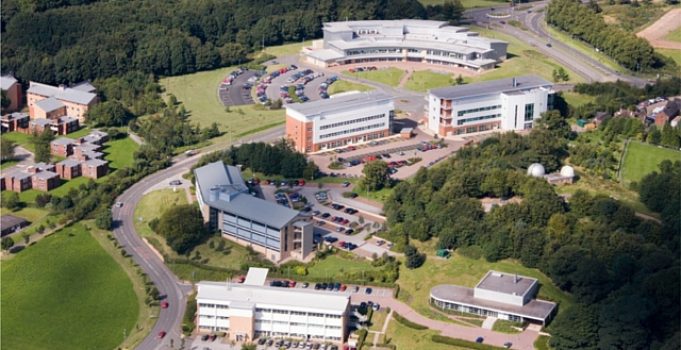 Stoke & Staffordshire energy technology in the spotlight for Chinese visit

A Chinese business and government delegation has visited Keele University to learn about Stoke-on-Trent and Staffordshire’s world-leading expertise in energy technology.
The group from the Chinese regions of Guangzhou and Tianjin, and also from Beijing, who were on a four-day visit to the Midlands, visited Keele on November 24 to talk to researchers and businesses based at the Keele Science and Innovation Park about environmental and low-carbon technologies and the University’s ambitious plans for one of the UK’s first at scale smart energy network demonstrators.
They also met John Carr, the Stoke-on-Trent and Staffordshire Local Enterprise Partnership board member with responsibility for energy and low carbon affairs.
John Carr commented: “The Chinese visitors, who are in the main influential government people, have a strong interest in the Environmental, Energy, Advanced Manufacturing and Medical fields – and they have identified our work, activities and abilities in these areas.
“The Energy projects now underway here are exemplar in the UK and these are allowing us to develop the region as a Centre of Excellence for decentralised energy – this is of particular interest to them. We plan to build on this with them to identify two way investment and partnership opportunities – indeed this is our part of the overall UK Government’s strategy with China, as seen in the media.”
Mr Carr briefed the visitors on Powerhouse Central, the City Deal designed to drive economic growth by using local energy assets.
They also heard about Stoke-on-Trent’s plans for a District Heating Network from Andrew Briggs, client manager for energy at Stoke-on-Trent City Council, and Keele’s Smart Energy Network Demonstrator from Phil Butters, the university’s director of estates and development.
Staffordshire County Council leader Philip Atkins, who was among the civic and business leaders meeting the Chinese team, said: “It is important that as a country we strengthen our international trading relations and we’re pleased to have been able to showcase Staffordshire to the Chinese delegation.
“Through the EU World Cities programme and China’s Silk Road Initiative we have working to strengthen Chinese ties with the Midlands and wanted to demonstrate how Staffordshire is a leading area for innovation, advanced manufacturing and research and development.
“It is fitting that the delegation visited Keele, where we are building a £7million business innovation centre with the university which will be complete by next spring. In this and other projects, we are showing how we are working successfully with business, universities and the Government to increase investment opportunities in Staffordshire.”
The Chinese delegation were then welcomed to Keele Hall by Vice-Chancellor Professor Trevor McMillan and met representatives from leading local businesses including Wardell Armstrong, Lucideon, Omni Heat & Power, Cobra Biologics and Siemens.
Professor McMillan commented, “The Keele brand has international reach and visibility and is an increasingly important part of how the university will play its role in anchoring the value of a research-led university to its locality.
“University investment in our smart energy network, and committed investment as part of the City Deal will enable its demonstration and use to underpin new product development by local businesses and new international export and commercial partnership opportunities.”
The 22-strong delegation also visited business sites and civic leaders in Wolverhampton, Birmingham, Warwickshire and Worcestershire. The visit was organised by the EU’s World Cities project, which links EU regions with their counterparts in China.
The Mercia region, taking in the Stoke-on-Trent LEP area, plus Birmingham and the Black Country and their neighbouring shire counties, has been chosen to link with Guangzhou, formerly known as Canton, the capital of Guangdong province and the third largest city in China, plus the Tianjin city region near Beijing.
A hub office, the Mercia Silk Road Bureau, is being created by the local authorities involved to facilitate this new “Silk Road” two way partnership linking with China for businesses, local authorities, universities and colleges. The bureau will help in identifying businesses for linking discussions and will also assist in travel and export documentation to smooth the path for SMEs.
Guangzhou and Tianjin have much in common with their English counterparts, with both regions seeking to move into high value manufacturing and a technology-led industrial renaissance.
It is hoped the new link will help boost business-to-business and investment opportunities between the two countries, as well as innovation and technological development in areas including advanced manufacturing and sustainable energy.