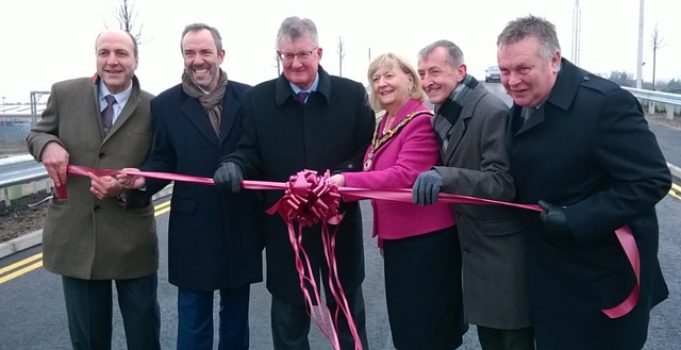 A key Staffordshire road and rail bridge, providing access to a new multi-million-pound industrial and warehouse development, has been officially opened.

Business leaders, property experts and civic dignitaries saw the unveiling of the new bridge at Burton Old Road in Lichfield, which now forms the access to the Lichfield Trent Valley station car park and the Liberty Park, Lichfield, development.

Liberty Park, Lichfield, is a £38 million development of 441,000 sq ft of industrial and warehouse units that will create hundreds of jobs.

The replacement bridge over the West Coast Mainline was the first business development project backed by the Stoke-on-Trent and Staffordshire Local Enrterprise Partnership’s Growth Deal to get under way in Staffordshire and is the first to have its infrastructure work completed.

The work was carried out by Staffordshire County Council and was paid for from the LEP’s Growth Deal funding allocation from the Government, with additional financial contributions from Liberty Property Trust. It will pave the way for construction of new industrial and warehouse units by Liberty and its partner Stoford Developments.

Work involved replacing the old bridge over the railway. It was demolished overnight on Christmas Day 2014 before being replaced. Twelve concrete beams were put in place to provide the new bridge deck in July. Burton Old Road has also undergone major improvements.

Stoke-on-Trent and Staffordshire Local Enterprise Partnership chairman David Frost CBE said: “The impressive pace of progress on these essential infrastructure improvements at Liberty Park has got our Growth Deal plans off to a flying start.

This success of this first flagship project is a real boost to our package of strategic industrial and commercial developments that will set firm foundations for continued economic growth across our region.

“We are delighted to see that our ambitions to create more and better jobs benefitting local communities are taking shape on the ground. Showpiece projects such as Liberty Park illustrate the benefits of working in partnership with the private sector and civic leaders and show that our region is very much open for business.”

Staffordshire County Council economy leader Mark Winnington said: “The official opening of this rail bridge is a real development achievement – not only for Lichfield and Liberty Park but for Staffordshire as this is the first Growth Deal infrastructure project to be completed. It sends a clear message to potential investors and the Government that we are delivering major schemes with our partners on time and on budget. This puts us in a strong position moving forward with future projects.

“Now the foundations have been laid, we look forward seeing the on site development get underway and understand there is already significant interest in the site. Ultimately this means growth in our economy and more jobs for Staffordshire people.”

Andrew Blevins, managing director of Liberty Property Trust said:  “The opening of the bridge is an important milestone for Liberty Park, Lichfield, and is an excellent example of Staffordshire County Council working with the property industry to enable commercial development and jobs to come to Lichfield.

“The improved public infrastructure which has now opened up the development site was jointly funded by Government and Liberty Property Trust. Since the development was launched in March 2015, it has already attracted interest from potential occupiers well placed to create jobs and economic growth for the region.”

Councillor Mike Wilcox, leader of Lichfield District Council, added: “We’re thrilled the new bridge has been officially launched and is providing a gateway to the impressive Liberty Park. This development demonstrates how Lichfield District continues to be an attractive place for investment and is a fantastic location to grow your business.”