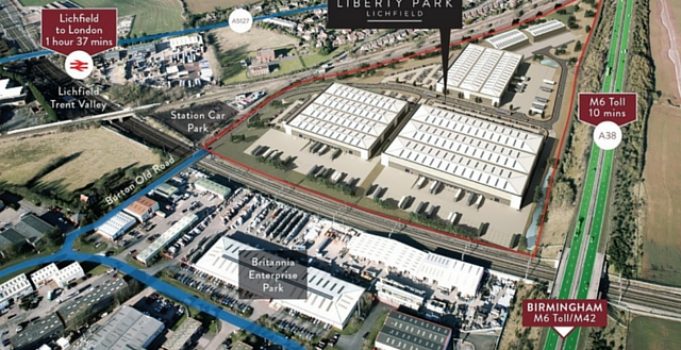 Jobs boost for Staffordshire and Stoke from new employment sites

The completion of infrastructure works to major employment sites is laying the foundation for more new jobs for Staffordshire and Stoke-on-Trent residents.

New job prospects are opening up at the same time as the claimant count in Staffordshire has hit an all-time low. Latest Jobseekers’ Allowance figures released this week show the number of people claiming JSA stands at just seven per cent of the county population.

Liberty Park is predicted to provide more than 1,000 new jobs. The project, which was allocated £4million from the LEP’s Local Growth Fund, has seen Staffordshire County Council carry out the bridge replacement and road improvement works before the developer Liberty and its partner Stoford move on site to build the industrial units.

The funding is part of an £82 million package of major Growth Deal projects being delivered across Stoke-on-Trent and Staffordshire by the local enterprise partnership.

Meanwhile work to provide the infrastructure for a new business park at Meaford near Stone is on schedule for completion in May. The project, carried out by the county council, received a £4million allocation through the LEP from the Local Growth Fund. Developer St Modwen will then take the scheme forward on site. The development, on what is the largest brownfield site in the county, could provide up to 2,200 jobs when completed.

In late spring, a new innovation centre at Keele University Science and Innovation Park will be completed. The £7milllion development between Staffordshire County Council and KUSIP will look to attract leading UK and international businesses in the medical, technology and engineering sectors. It will provide up to 130 skilled jobs and is the fifth centre of its kind on the university campus. It will be located on an established site for future development on the Keele campus.

LEP chairman David Frost CBE said: “It is clear that Staffordshire is proving to be an increasingly attractive location for businesses both to locate and grow. The availability of sites, our central location in the UK and a skilled labour force are an unbeatable combination. The LEP will continue to promote the positive advantages of establishing business operations in the county.”

Staffordshire County Council’s economy leader Mark Winnington said: “Staffordshire’s success story in increasing job opportunities over the last few years has been phenomenal. The county council has supported business expansion, backed smaller enterprises, invested where it matters and with partners is driving up skills. We know we must continue to build on these successes and we are literally laying the foundations for new jobs in the coming months and years. We are ahead of the game with our business development and this is something that has been recognised by Government. These business sites will bring a real mix of quality jobs to Staffordshire people.”