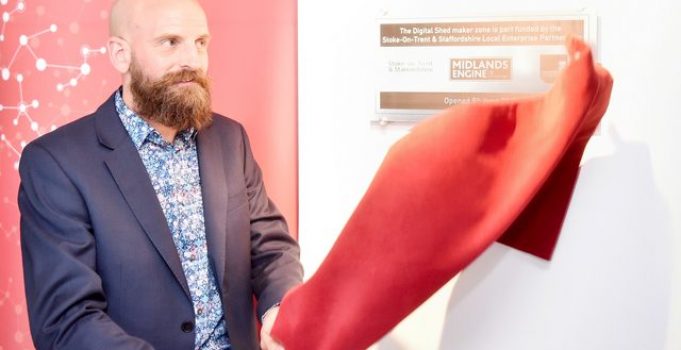 Staffordshire University has announced details of the people set to receive its highest honour at this year’s summer graduation ceremonies.

The line-up includes Alun Rogers, vice chair of Stoke-on-Trent and Staffordshire LEP and co-founder of award-winning technology solutions company risual, who will receive Doctor of Technology for his role in growing digital skills and capability in the region.

Martin Tideswell, Sentinel Editor in Chief and Danny Flynn CEO of YMCA North Staffordshire  will each be awarded Doctor of the University for their connected roles in the community and helping to inspire local people about their futures.

Ceramic designer and star judge on The Great Pottery Throw Down, Keith Brymer-Jones will be recognised with Doctor of Arts for his passionate support of the city’s rich cultural heritage.

Vice-Chancellor Professor Liz Barnes said: “Our awards ceremonies are celebrations of achievement that our graduates, their families and friends will remember for the rest of their lives. They are made all the more special by the awarding of honorary degrees to inspirational people who share in the University’s values and who help us to drive up education and skills.”

“We are delighted to be connected with people who play a crucial role in talking up our City, our region and its people and who deserve the honour for the tremendous work they do.”

Alun Rogers, who is pictured above unveiling the new Digital Shed facilities at Staffordshire University, commented: “I am delighted to receive this honour from Staffordshire University. The LEP is passionate about promoting our region as a great place to live, work, invest and do business, and nurturing the innovation, R&D and bright ideas that will create a thriving, forward-looking local economy.

“Digital skills are key to these aims, and Staffordshire University is at the forefront nationally and internationally in developing this sector.”

More than 2,800 graduates are to be congratulated on their achievements by Professor Liz Barnes and Chancellor of Staffordshire University, the Lord Stafford, during the week of ceremonies to be held at Trentham Gardens between 9 and 13 July.

The University will also be hosting Autumn Awards ceremonies at the King’s Hall in November.

Sue is Chief Scientific Officer for the NHS and as such has provided leadership to the 50,000 healthcare scientist workforce. The award recognises Sue as a revolutionary figure in healthcare science who is transforming educational pathways and service delivery to ensure that scientific discovery, diagnostics and research are at the forefront of medicine. It also recognises her role as chair of the Apprenticeship Trailblazer Group for Healthcare Science Practitioners and as founder of the CSO Women in Science

Julie is inextricably linked to sports and is recognised among the top 50 most influential women in Sport. Currently the CEO of British Cycling, her award recognises Julie’s contribution and expert knowledge in the field of sports development, for raising the profile of women in sport and for inspiring young people at grassroots level to participate in sport and excel.

Kieron is an influential figure in the cartoon and comic arts industry with links to both Marvel and DC comics. His award recognises Kieron’s outstanding achievements and acclaim through his award-winning publications, work with Marvel and as an independent creator. It also acknowledges the role he plays in addressing issues of importance to students and young people.

Keith Brymer-Jones is a ceramicist and judge of The Great Pottery Throw Down who has taken it upon himself to champion the city’s rich cultural heritage. The award recognises Keith’s support for the University’s creative courses and his involvement with ceramic and creative industries in Stoke-on-Trent including the British Ceramic Biennial.

Thursday 11 July, 10.30am: Martin Tideswell, Doctor of the University

Martin is Editor in Chief of Staffordshire Sentinel Newspapers and by his own admission #localandproud. The award recognises Martin’s public role in celebrating North Staffordshire and its people and for partnering with the University on initiatives that help inspire people about their futures including Our Big Read and Too Write. It also recognises his role as a media professional and as a provider of work experience and employment opportunities to Staffordshire University students.

Alun is a founder member of technology solutions company Risual and Vice-Chair of Stoke-on-Trent and Staffordshire LEP where he plays a key role in raising reputation for growing digital skills and capability. His award recognises his role in championing the criticality of digital skills for the future of the county, and investment in the development of digital apprenticeships.

Danny is CEO of YMCA North Staffordshire and an inspiration to many. He is fiercely passionate about the area and giving young people the life-chances they need to excel and thrive. The award recognises Danny as an inspirational leader, for his support of disadvantaged young people and bringing positive change to individuals and society. It also acknowledges the vital role he plays in connecting communities to tackle social issues and isolation.