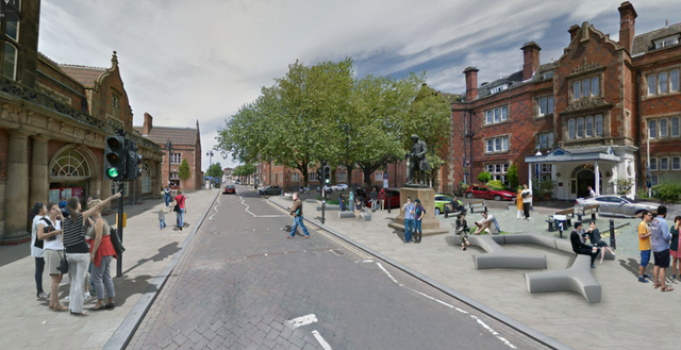 A public consultation has been launched on multi-million pound plans to continue the transformation of the University Quarter area of Stoke-on-Trent – with schemes drawn up to improve public realm, reduce congestion for motorists at traffic hotspots and revamp the area outside Stoke Railway Station.

Key elements include increasing capacity at Joiners Square roundabout and changes to the Leek Road/Station Road junction to reduce queuing, improving Winton Square outside the train station as a pedestrian-friendly gateway for visitors and carrying out public realm works to improve pedestrian and cycle access in the area around Staffordshire University’s campus.

It is also proposed to widen Leek Road and improve its junction with Cauldon Road to reduce congestion. The planned changes will be funded from various sources, including Stoke-on-Trent and Staffordshire Local Enterprise Partnership and Stoke-on-Trent City Council.

Councillor Jack Brereton, cabinet member for regeneration, transport and heritage, said: “This is a very exciting opportunity to transform an important area of our city and I am pleased we are launching this consultation as the next phase in the development. The University Quarter is not only home to thousands of university and college students but also our main train station, which is used by more than two million passengers every year. For many people this area is the first impression they get of our city and it should be a gateway of which we are proud.

“These works will not only make the University Quarter a better place to live, work and study, but will also reduce congestion at some of our most problematic traffic hotspots. It will make the area much more pedestrian friendly and improve the flow of traffic to and from the city centre.

“Our city is now one of the fastest growing economies in the UK and this work will help attract further investment, creating more job opportunities. With our economy expanding and 1,200 new homes being built close by in our Housing Zone, it is absolutely vital that our transport infrastructure matches the ambitions that we have for our city.

“I would encourage as many people as possible to get involved with the consultation, look at the plans and tell us what they think about the proposals.”

Stoke-on-Trent and Staffordshire Local Enterprise Partnership chairman David Frost CBE said: “Stoke-on-Trent is an ambitious city with an exciting range of plans to build on its strengths and transform its future.

“The railway station and University Quarter area is a key gateway to the city and it is important that we work together to make it welcoming and accessible for businesses, residents and visitors. This is vital to our aim of ensuring that Stoke-on-Trent is a place where people want to live, work and invest, creating a thriving economy and community.”

Linda Degg, Staffordshire University director of estates and commercial services, said: “These are significant proposals that will change the traffic systems around the University Quarter and which are designed to improve the environment for people who live, work and study here as well as for people using Stoke Railway Station.”

Work on the first stage of the improvements, which is seeing public realm being revamped on Thornton Road and Spencer Road, in Shelton, and Glebe Street in Stoke, got under way in September and is expected to be finished in March 2017.

An online survey has been created by Stoke-on-Trent City Council to gain feedback from residents and businesses on the next stages of the programme, which is live until Friday, January 6. It can be found at www.stoke.gov.uk/UniversityQuarterImprovements along with detailed descriptions of individual proposed improvements within the programme. There will also be the chance for the public to view the plans and speak to people behind the proposals at exhibition events (*see dates below).

Once the consultation has finished, all feedback received will be considered before preliminary and then detailed designs are drawn up in early 2017. This will start with Joiners Square roundabout, the widening of Leek Road, Cauldon Road/Leek Road junction improvement and relocating the short stay parking bays directly outside the train station to a new location. Work could start in phases to minimise disruption from late 2017.

The consultation events take place on: