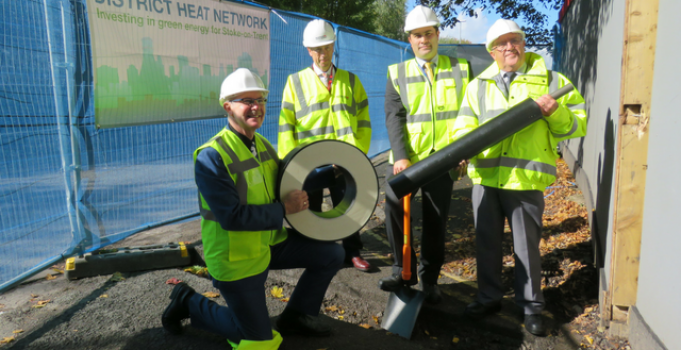 A pioneering programme to bring a network of sustainable, low carbon and low cost heat energy to Stoke-on-Trent is underway.

Over the next 11 weeks, the first 700 metres of pipe will be laid underground between Leek Road and Boughey Road in Stoke. It is the first phase of four kilometres of piping around the University Quarter, which when completed next year, will mean that businesses and households will have the potential to connect to receive low maintenance, affordable heat, without the need for gas boilers in their properties.

It is the first step in Stoke-on-Trent City Council’s innovative district heat network, a programme which won multi-million pound investment through the government’s City Deal that was secured by the Stoke-on-Trent and Staffordshire Local Enterprise Partnership in 2014. The network will go on to see 18 kilometres of piping laid underground across the city.

The council’s ambitious proposals have already mapped out the geology under the city to look into ways of tapping into naturally forming underground geothermal energy, which would heat the network, helping to power the local economy and provide alternative, sustainable energy for households.The first pipes now being laid will be powered via an energy centre off Leek Road.

The works will create some disruption to road users, but this will be kept to a minimum, with pipe installation taking place during evenings and weekends, and two-way flow of traffic maintained during the day where possible.

David Frost, chairman of Stoke-on-Trent and Staffordshire Local Enterprise Partnership, said: “It is great to see this pioneering project becoming a reality. This showpiece sustainable energy scheme has huge potential as a source of affordable low-carbon energy for local businesses and residents. It illustrates the can-do attitude of the LEP and Stoke-on-Trent City Council in finding greener energy solutions that will help our economy to grow and raise Stoke-on-Trent’s international profile as an innovative city.

“A district heat network has the potential to cut the city’s carbon footprint by 12,500 tonnes per year – the equivalent of 2,500 hot air balloons. We’re now taking the first steps to make this a reality. It is an exciting time and a project that we should all get behind.”

The proposals have taken 10 months to carefully plan out, including ground conditions and utilities mapping. The initial network will create the potential for Staffordshire University, student and other residential accommodation, and other businesses to connect.

Councillor Anthony Munday, cabinet member for greener city, development and leisure, said: “This is a hugely significant project for the city and one that has taken time to get the detail right so that we can make a positive difference in reducing our environmental impact and creating sustainable energy for generations to enjoy.

“The pipes use materials that are durable enough for at least 50 years, and we are installing infrastructure so that other utilities and technology companies can access underground networks without the need to dig up roads for new cabling. The works now to take place have been co-ordinated and programmed with local businesses and residents in order to minimise impact on traffic and local people.

“It is a really exciting time for the city, and we hope that the first customers will be able to connect to the network from autumn 2018.”

Professor Ieuan Ellis, Pro Vice-Chancellor at Staffordshire University, welcomed the launch of the scheme, which is set to lower domestic and commercial heating costs as well as creating new jobs in North Staffordshire. He confirmed that the university is exploring the potential to be an early adopter of the new district heat network system and to create a live demonstrator on campus.

He said: “Staffordshire University has a strong academic reputation in the area of renewable and sustainable energy systems and is already working closely with the city council and Nordic Heat to exchange knowledge, expertise and best practice relating to the city’s district heat network.

“Because of our shared ambition for the region to be internationally recognised for indigenous and sustainable energy, we have set up a think-tank that will use its academic and industry expertise, aided by student and graduate internships, to evaluate new technologies and approaches, and to support those in other cities and countries looking to develop their own district heat networks.”