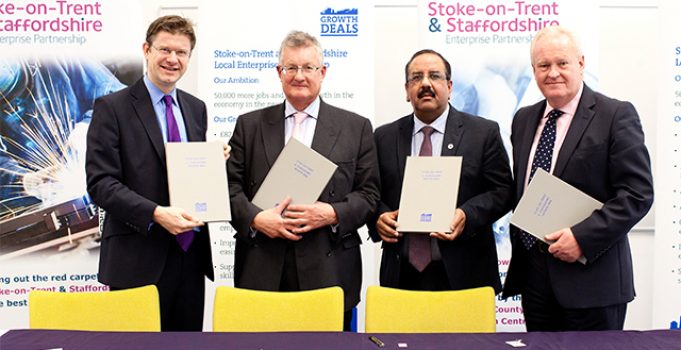 Eleven thousand new jobs are set to follow major business and supporting transport development in Stoke-on-Trent and Staffordshire after one of the largest Government Growth Deals in the country was signed on the 16th October.

Greg Clark MP said: “Stoke-on-Trent and Staffordshire are at the heart of our economy and the country needs the area to be leading the way. By investing in sites for new jobs, road improvements and the skills employers need, this is a big deal for everyone who lives and works in the area.”

The deal was announced in early July and development work could begin as early as April. The investment will support the long-term economic plan drawn up by the Stoke-on-Trent and Staffordshire Enterprise Partnership. It is estimated that the growth deal will bring a further £10million from public and private sector investment.

Projects which can get off the ground in 2015/16 are the development of the Etruria Valley Enterprise Area (up to 2,500 jobs), Lichfield Park employment site (1,100 jobs), Meaford employment site near Stone (2,200 jobs) and Bericote Four Ashes employment site in South Staffordshire (1,080 jobs). There will also be £16.1million investment to construct the Stafford Western Access Route – aiding growth and cutting congestion in the county town.

The following year will see a major development at Branston Locks near Burton leading to potentially 3,800 jobs and 2,500 new homes and a sustainable transport package for Stoke-on-Trent and Staffordshire which will improve connections and reduce congestion. It will include projects to introduce smart ticketing, improve bus punctuality and urban traffic management.

In addition, the investment will support the LEP’s Advanced Manufacturing Skills Hub – providing the skills and engineers needed by business and increasing traineeships and apprenticeships opportunities. Phase One of the hub is already up and running in Tamworth, Stoke-on-Trent and Newcastle and can now expand to other areas.

Stoke-on-Trent and Staffordshire Enterprise Partnership chairman David Frost said: “Today is significant because now the deal has been signed it means we are ready to start delivering major business and transport projects, leading to the creation of thousands of jobs in our area which is our main objective.

“This Growth Deal is one of the largest nationally and demonstrates the hard work put in and strong business case we put forward. We have shown that we can turn projects around quickly to create jobs, drive up skills and attract additional investment. We now look forward to seeing projects get off the ground next year which will make a real difference to the people of Staffordshire and Stoke-on-Trent.”

Staffordshire County Council deputy leader Ian Parry said: “The Growth Deal reflects our successful delivery of major projects and support for job creation. Prime examples of this are the work we have done at i54 South Staffordshire – where we will see the county council-built motorway junction open next month – and transport projects to support growth at Rocester, Denstone and Tamworth. We have also worked hard to increase skills to meet demands of our businesses. An engineering and automotive skills centre in Tamworth, in which the county council and LEP each invested £1million, opened in September and has already seen a high take-up in courses.

“The Growth Deal means we can make decisions locally on projects we know will deliver better paid jobs and improved quality of life for Staffordshire people.”

Stoke-on-Trent City Council leader Mohammed Pervez said: “This is another big step forward in our relentless drive to create jobs and growth and make Stoke-on-Trent the place for business and inward investment; however, this is only the beginning of our aspirations to fulfil the enormous growth potential the city has to offer. Etruria Valley has a big part to play in the city’s economic regeneration and making sure we maximise the amount of employment use on the site is one of our key objectives. Last month parcel firm DPD announced it was planning to build a new distribution centre there, creating almost 100 jobs and becoming the latest high profile occupier to be attracted to the site, so we know we are on the right track.

“The Growth Deal, along with further investment planned in future years, will enable us to open up a new strategic corridor into the very heart of the city, which will transform connectivity and create the opportunity to unlock thousands of jobs through significant employment and training opportunities and hundreds of new homes. We are committed to working in partnership with the LEP and Government moving forward to raise the profile of the area on a national and international stage and attract more investors.”