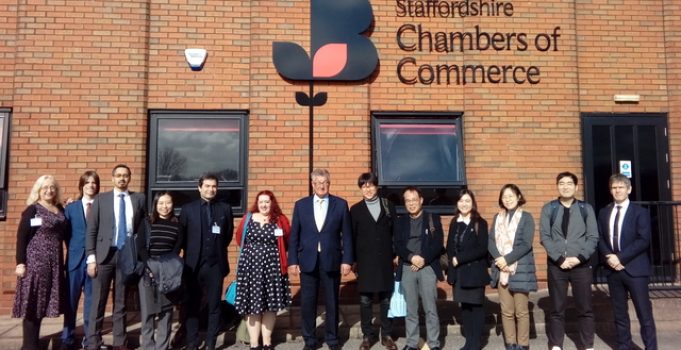 The pioneering augmented reality work of an award-winning Tamworth digital firm is opening up new markets on the other side of the world.

The delegation is exploring how augmented reality mental health resources developed by Enlighten could be used in workplaces, schools and colleges, hospitals and the wider community in South Korea.

South Korea has one of the highest suicide rates in the world and civic leaders are keen to tackle the problem by using new support resources that can easily be accessed on smart phones and other devices for people at risk.

They are also discussing and sharing information on digitally-enabled Smart Cities and the opportunities and implementation in the UK compared to South Korea. As part of their week in the UK, the delegation is visiting leading Midlands universities working with Enlighten on some of the firm’s projects, including Staffordshire, Aston and Birmingham City universities, and attending the Smarter Cities Alliance conference at Birmingham University.

Staffordshire Chambers of Commerce hosted a networking breakfast event at its Stoke-on-Trent HQ during the visit, and Enlighten has also received support and advice from the Department for International Trade and Stoke-on-Trent and Staffordshire Local Enterprise Partnership.

Stoke-on-Trent and Staffordshire LEP chairman David Frost CBE spoke about the work of the LEP in encouraging growth and supporting businesses at the networking breakfast. He commented: “The can-do attitude and entrepreneurial drive of Enlighten in pursuing international trade opportunities is inspirational and is creating a great showcase for our region with this trade visit.

“The LEP is delighted to have played a part in creating foundations for the firm’s success by investing a total of £2.95million in the Tamworth Enterprise Quarter, which is revitalising the town centre and providing a new base at the Enterprise Centre for small and start-up businesses such as Enlighten.”

Enlighten has been developing Augmented Reality resources, including mental health support materials, for over five years. The firm produced the world’s first AR awareness raising campaign for Rethink Mental Illness, the largest mental health charity in Europe. That campaign has since been redesigned and updated for use by the Armed Services, focusing particularly on PTSD, and for the West Midlands Combined Authority, as part of the WMCA’s Thrive at Work toolkit supporting employees.

Enlighten has notched up a series of awards, including the Staffordshire Chambers of Commerce ‘Most Promising Start-up’ and ’Digital Business of the Year’ awards in consecutive years, the Asian Business Chambers award for Digital technology and innovation and the Bronze Armed Forces Covenant award. They were also chosen as part of the CE50 2018 Cohort – a list of the 50 most creative businesses in England and as one of the Small Business 100 – The top 100 businesses in the whole of the UK.

The firm was founded by former ICT teacher Suzanne Edwards and her business partner Steve Wileman, formerly head of e-learning at South Staffordshire College, and was one of the first businesses to move into Tamworth Enterprise Centre, part of the showpiece Enterprise Quarter being developed in the town centre, with support from Stoke-on-Trent and Staffordshire LEP.

Suzanne Edwards said: “Although some of our augmented reality campaigns have had a truly global impact, our International Women’s Day had a digital reach of over five million and was accessed all around the world, we didn’t think for a minute that we would be attracting high level government officials from South Korea less than three years since starting up! It is a truly remarkable opportunity for Enlighten and our partner companies and we are proud to be able to showcase Tamworth Castle and surrounding areas of Staffordshire and gift them some of our fantastic local produce to take back with them.”

“We are grappling with increasing mental health issues globally and we have high hopes that our Augmented Reality content can support and provide a positive impact on millions of lives in this world.

“The name Enlighten is starting to be recognised worldwide for our innovative use of emerging technology and use ‘tech for good’ in such a fast-moving and emerging sector. We have always seen the potential application for AR as a facilitating technology in our everyday lives from the development of AR in the construction industry, Global Inclusivity AR campaigns (Women in Tech) and world firsts for AR mental health support.  All this from our amazing offices in Tamworth Staffordshire.”

David Frost is pictured (centre) with Suzanne Edwards and Steve Wileman (next left), members of the delegation and Chambers staff