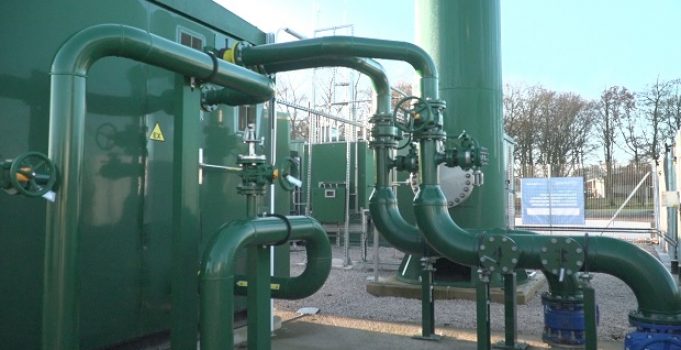 The UK’s first live pilot to inject zero carbon hydrogen into a gas network to heat homes is yielding positive results, according to those using the gas.

HyDeploy, now well into its pilot period, is a ground-breaking green energy demonstration that is supplying a blend of up to 20% hydrogen by volume with natural gas to 130 homes and faculty buildings at Keele University.

The project is demonstrating that a blend of up to 20% hydrogen can reduce climate-damaging carbon emissions from heating the nation’s homes, while at the same time enabling customers to use their gas supply as normal, without any changes needed to gas appliances or pipework.

Results so far show that gas appliances using the blend are functioning normally and no differences to the gas supply in houses and businesses has been reported. The project is also, for the first time in the UK, gathering views of those using a hydrogen blend in their homes.

Zoe Robinson, Co-Director of Keele University’s Institute for Sustainable Futures, is leading research into the perceptions of hydrogen blending among residents taking part in the pilot. She said:

Social acceptance is a key part of technical energy transitions. The Keele demonstration provides an ideal opportunity to learn from customers experiencing a hydrogen blend in their own home.

Our research so far has shown a generally positive response from residents to being part of the trial with some people genuinely excited about it. It is also clear that exploring the perceptions of people taking part in this type of project is important, both for increasing our knowledge of how customers feel about the new technology in their homes, but also for making those people feel valued.

Energy pilot projects like this shouldn’t just be viewed as technical exercises – the human perspective is important and will be increasingly so if such projects are rolled out more widely.”

The results of this live demonstration of hydrogen blending reflect the results we were getting from laboratory testing before the pilot began. The gas network and gas appliances are operating normally and customers are positive about the project. They haven’t noticed any difference to their gas supply and haven’t needed to change the way they use gas.

This is great news. It bodes well for the public hydrogen blending trial in the North East, which starts later this year, and for a potential national roll-out of blending in the future.”

The Keele demonstration is such an important stepping stone, not only from a technical perspective but also in terms of customer support and acceptance for hydrogen as a low carbon technology.

There is a genuine excitement from customers around being part of pioneering pilots such as HyDeploy, and we’re very eager to build on this enthusiasm for the public demonstration in Winlaton later this year.”

The research showed that people value the environmental benefits of the project and minimal disruption to their lives and also demonstrated that some participants wanted reassurance about safety and cost implications. One-to-one communications with members of the project team, through drop-in sessions, helped address concerns, while others also expressed an implicit trust that the project would be safe.

There were varied attitudes towards cost implications, with several participants mentioning this as an area of initial concern for the future, although those taking part in the pilot project are not being charged for the hydrogen.

If a 20% hydrogen blend was rolled out across the country it could save around six million tonnes of carbon dioxide emissions every year, the equivalent of taking 2.5 million cars off the road. Hydrogen blending at this level could also open the door to greater use of hydrogen – possibly up to 100% in the network – and kick off a low-carbon hydrogen economy in the UK. The Committee on Climate Change has determined that the use of hydrogen in our energy system is necessary in order to reach Net Zero. Key learning was shared between international projects who are also trialling hydrogen blends.

Keele University’s Institute for Sustainable Futures is leading the way in smart and low-carbon energy research, using Keele’s unique campus setting as a ‘living laboratory’ where innovative approaches to low-carbon energy can be trialled. The campus was viewed as the perfect location for the HyDeploy project, owning and operating its own private gas network, which could be safely isolated from the wider UK gas network.

In addition, the University is working with businesses, academics and graduates to create Europe’s first ‘at scale’ multi-energy-vector Smart Energy Network Demonstrator  (SEND) – where new energy-efficient technologies can be researched, developed and tested in a real world environment.