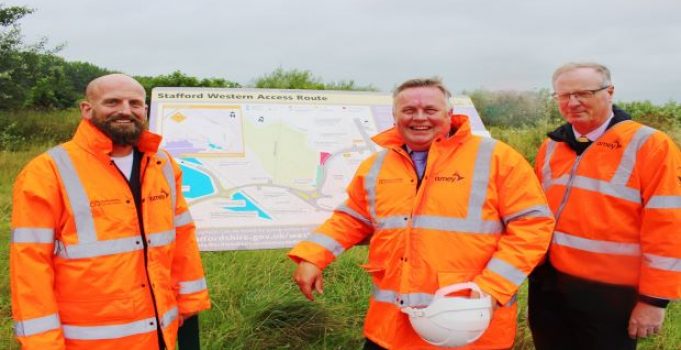 Work is now under way on a multi-million-pound road project which will boost growth and ease congestion in Stafford.

The Stafford Western Access Route will enable millions of pounds worth of new housing and business development to take place. It will also improve traffic flow in the town centre, particularly by the railway station.

It is being funded by developers and with £15.5million secured by the Stoke-on-Trent and Staffordshire Enterprise Partnership through the Government’s Local Growth Fund.

On Friday August 16 partners and the project team carrying out the two-year project met on site to mark its start. Around 130 people attended a public information event in June where details about the scheme were presented.

While some traffic management will be put in place, the majority of work will be off current roads and so disruption will be kept to a minimum. The only road closures will be on Doxey Road and Greyfriars at its junction with Madford Retail Park. There will also be some lane closures on the A34 Foregate Street, though traffic will still be able to use the other lanes.

A full closure of Doxey Road will need to be put in place for one weekend in early 2021 and again for four weeks just afterwards. The four-week closure will only take place when the new section of road from Doxey Road to Castlefields is open. Traffic can then follow a short diversion onto Newport Road.

The scheme will include improved conditions for bus services, pedestrians and cyclists. There will also be environmental benefits through the redevelopment of areas of derelict land and landscaping along the route.

We are seeing the delivery of major Local Growth Fund projects across Staffordshire which demonstrates the success of our effective working with partners.

The Stafford Western Access Route is vital for the town’s future growth. Improving transport infrastructure attracts new business and helps to retain existing companies, enabling them to grow and thrive.

As the owner of a business in Stafford and as a resident I know how important this is. It has been a long process to get to this stage and so we’re pleased to see construction work begin.”

The Stafford Western Access Route is an essential part of Stafford’s ambitious growth plans. It will enable future development contained in the borough’s local plan – notably the delivery of thousands of new homes and business, office and retail space. It will also reduce congestion in the town centre, particularly around the railway station.

We’re now pleased to have got started on construction work. Around 130 people attended our information event and we received some really positive feedback on how this route will make a real difference to the town.

As most of the construction will be taking place off the existing road network we are confident that any disruption will be minimal. We have coordinated the scheme so that traffic coming from Doxey during the four-week bridge closure will only face a short diversion on the new section of road through Castlefields.

We will be keeping in contact with local residents, businesses and partner organisations throughout the scheme.”

There has been an enormous amount of investment in our borough already – with plans and projects in the pipeline for much more.

This demonstrates the confidence businesses have in locating to Stafford and they always cite our connectivity as one of the main reasons to set up, or relocate, in the area.

One of those ambitious projects is the Stafford Station Gateway redevelopment which will lead to the transformation of land alongside our train station. But investment in infrastructure is integral to facilitate this growth in our borough so I am pleased construction work on this key route is now underway.”

Everyone has worked hard to get us to the stage now where work is beginning on such an important project for Stafford.

Building new homes and commercial development on the western side of town can only happen with this road in place. In addition to bringing in multi-million pounds’ worth of investment into Stafford, it will also reduce congestion in the town centre.

This will support the ambitious growth plans around the railway station which will enhance one of the main gateways to Stafford.”

We are committed to boosting economic growth across the whole of the Midlands Engine and ensuring that no towns are left behind.

With £15.5 million of investment from the Government’s Local Growth Fund, this new access route will not only provide faster roads and improved transport to and from Stafford, it will also support new housing, infrastructure and economic development across the region.” 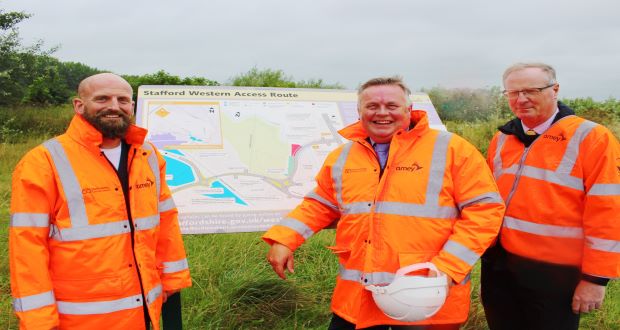