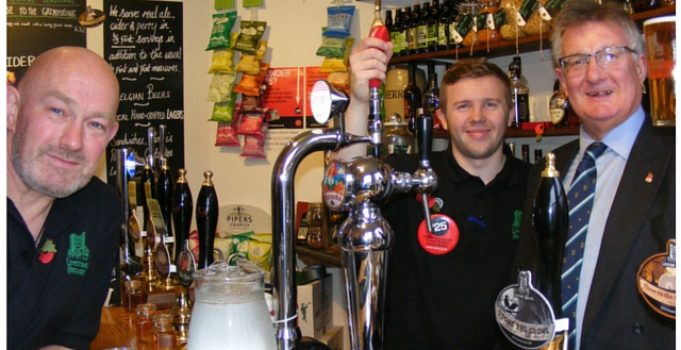 The Stoke-on-Trent and Staffordshire Local Enterprise Partnership is raising a glass to Small Business Saturday with a visit to one of the local businesses creating jobs and growth and putting our region on the map.
Small Business Saturday, which this year takes place on December 5, is a national campaign to encourage people to support their local businesses. The campaign highlights the influence consumers can have on their area’s prosperity by shopping locally and using tradesmen in their home area, while businesses themselves are also being encouraged to source their supplies and services from local firms.
Ahead of this year’s event LEP chairman David Frost visited the award-winning Lymestone Brewery in Stone to find out more about the success of one of the jewels in the crown of Stoke and Staffordshire’s small business sector.
Lymestone, owned and run by husband and wife team Ian and Viv Bradford, was launched in 2008 in the 19th century brewhouse buildings originally owned by Bents Brewery.
Since its launch Lymestone has gone from strength to strength, and is now brewing five different beers on a permanent basis, plus a range of 15 seasonal beers. It has opened its first two pubs, the Lymestone Vaults in Newcastle-under-Lyme and the Borehole in Stone, as well as supplying farm shops and independent retailers across Staffordshire and further afield. The firm now employs six staff at the brewery and 18 in the two pubs.
Individuality has been key to Lymestone’s success, said Ian Bradford, who is known to everyone as Brad.
“More and more people are choosing real ales because they want a drink that has its own distinctive local character, not a standard pint of Euro-fizz,” he said. “They want to know how their beer is made and the ingredients that go into it.
“It’s also important that we are not a faceless corporate giant, we are Brad and Viv, who work in Stone and live just down the road in Newcastle-under-Lyme.”
That personal approach extends to Lymestone’s own trading policies, with ingredients and services sourced locally whenever possible. The brewery buys much of its electrical equipment from a Stone firm and has its labels and literature produced by a local printer. And when Brad brewed a special edition watermelon-flavoured wheat beer, the 70 watermelons required were bought from the local greengrocer.
LEP chairman David Frost said Lymestone Brewery was a shining example of what Small Business Saturday is all about.
“Lymestone is a really great small business,” he said. “It is producing some excellent beers with – literally – a real local flavour and at the same time providing jobs, supporting other local businesses and contributing to a growing Stoke and Staffordshire economy.
“This drive, enthusiasm and pride in an excellent local product is just the kind of approach that the LEP is keen to promote to help our area to prosper. Firms such as Lymestone are giving consumers a great incentive to support their local businesses and we hope communities will do just that – on Small Business Saturday and throughout the year too.”