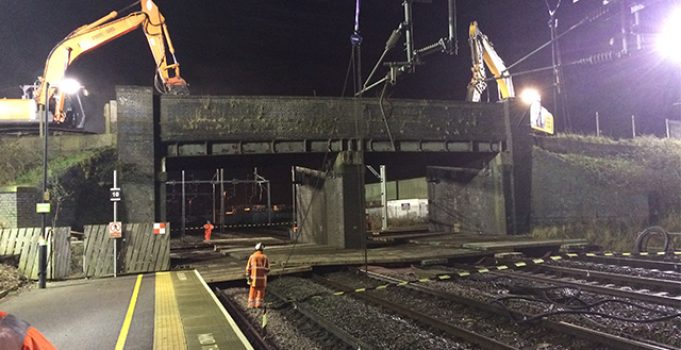 Work on the first scheme being delivered in Stoke-on-Trent and Staffordshire and supported by one of the country’s biggest Government Growth Deals started over Christmas.

The Lichfield Park scheme, which will result in up to 1,100 jobs being created, got underway at the beginning of December. A bridge across the West Coast Mainline was demolished during the network break. Its replacement, which will be built starting January 2015 and finished in the autumn of the same year, will provide access to the site.

Lichfield Park will see the development of a business park on land next to the A38 in the city after £4million was secured through the growth fund. The development will involve improvements to Burton Old Road which will provide access to the site.

Staffordshire County Council’s project team has worked hard to ensure it will be business as usual for Lichfield commuters. The car park off Burton Old Road is closed and an alternative car park open at nearby Crossfield Road. The scheme will also include improvements to the road network onto the site, and replacing the road bridge over the West Coast Mainline. The bridge was taken down over a 48-hour period during Christmas Day and Boxing Day this year, the only time when the work could be carried out without causing nationwide disruption.

Stoke-on-Trent and Staffordshire Enterprise Partnership chairman David Frost said: “Ours was one of the biggest growth deals nationally by the Government and reflects our ability with our partners to deliver major schemes. The efficient turnaround of such schemes is important not only so we complete on time and on budget, but also because it enables us to unlock future funding. Seeing the start of the first project just a few months after the Growth Deal was announced demonstrates that we mean business and is a really positive sign going into 2015.”

Greg Clark, Minister for Science, Universities and Cities, said: “It’s fantastic to see that the Local Growth Fund is already having an impact in Stoke-on-Trent and Staffordshire, with construction work starting at the Lichfield Park scheme. Stoke-on-Trent and Staffordshire only recently secured their £82.2 million Growth Deal, which aims to deliver 5,000 jobs and 1,000 houses by 2021.