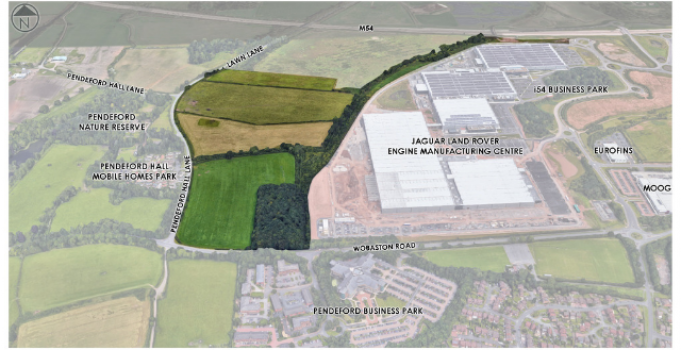 An extension to a major Midlands business park which could generate around 1,700 jobs and lever in up to £300 million of investment has been given the go-ahead.

When the extended site is fully built and occupied by businesses from a range of sectors, it could release up to £3 million a year in business rates – around half of which could be reinvested in funding public services. The first phase of the extension would create around one million square feet of new commercial business floor space.

The current site has a workforce of 2,700 people, with half of those being held by people living within a 10-mile radius. Work on the western extension is scheduled to begin this spring and it is anticipated to be fully occupied by 2024.

An agreement to move forward with the development of plots and access to the extension site was set to be approved on January 16.

Staffordshire County Council leader Philip Atkins said: “The i54 South Staffordshire western extension is another great project for us and has taken considerable and detailed planning. Planning approval therefore is a huge milestone for our partnership and good news for everyone.

“This was a logical move for us as we know there is high demand from businesses from a range of sectors. We anticipate the western extension could generate up to 1,700 jobs and lever in up to £300million in private investment. A fully occupied site could release total business rates of up to £3million a year, with around half of this reinvested to help fund public services.

“Now we can get on with the job of securing funding and getting started with site development. An expanded i54 South Staffordshire will play a key part in regional economic growth and the workings of the Midlands Engine.”

City of Wolverhampton Council leader Roger Lawrence said: “i54 is one of the UK’s premier advanced manufacturing business parks and this major news means we can now build on it success.

“Our joint investment at i54 has secured hundreds of millions of pounds of further investment and has brought thousands of jobs to the area, with half of employees living within a ten-mile radius.

“Demand is high for more accommodation from potential investors in a number of sectors and the western extension will enable us to deliver that for the benefit of local residents and businesses.”

Brian Edwards MBE, leader of South Staffordshire Council, said, “I’m delighted that the Council’s planning committee has granted outline planning permission for the extension. There has been considerable engagement and consultation with local people and stakeholders and the committee was satisfied that the plans represent a considerable economic opportunity for local people and businesses.

“The area’s world-class connectivity, growing local economy and dedicated and skilled local workforce base are clearly of exceptional interest to major investors and the planning committee was supportive of the planning permission extension, which will help realise the full potential of i54 South Staffordshire.”

The western extension scheme will also bring a plan to boost employment skills, training and recruitment to local people with a £150,000 contribution – helping them to access the newly generated jobs.

More than £1 billion has so far been invested in i54, with 2,700 people employed by multi-national companies JLR, Moog, ISP, Eurofins, ERA and Tentec with more than 4,000 jobs anticipated on the existing site when it has been fully built out over the next few years.

Over 3,500 students have also benefitted from a targeted skills and education programme.