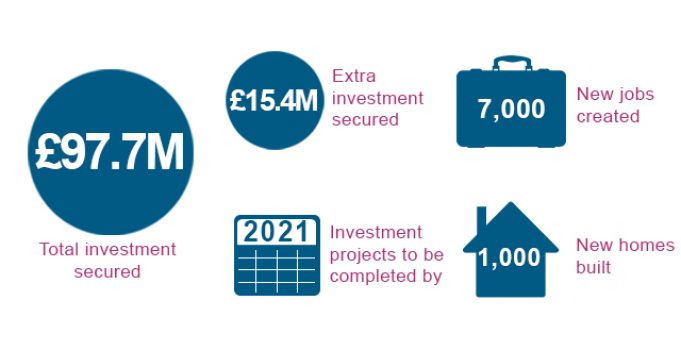 The announcement is on top of the £82.3m committed by the Government in July – totalling £97.7m of funding in just six months.

Over the lifetime of its Deal (2015-2021) it is estimated that up to 7,000 new jobs could be created,1,000 new homes built and that it has the potential to generate £70m public and private investment.

The LEP Chair David Frost said: Todays announcement is fantastic news and the fact that we have secured almost £100m committed investment in six months is not only remarkable, but an absolute testament to the growing success story of Stoke-on-Trent and Staffordshire.

It clearly demonstrates the Government’s confidence in our ability to deliver major job creating projects on time and on budget. Only a few days ago I saw for myself how the first Growth Deal-funded project, Lichfield Park, is already underway with two more to follow in the coming months.

We are to determine not just more jobs, but better paying jobs and we know these developments will attract significant further investment and support us in achieving our ambitious employment goals.

The additional proposed projects include:

In addition, the Government is also committed in principle to the use of discounted Public Work Loans Board to support the Creation of an Office Quarter in the Smithfield Business District in Stoke-on-Trent City Centre.

Cllr Philip Atkins, the Leader of Staffordshire County Council, said: “Staffordshire has stepped up to the challenge and is on a roll in terms of our delivery of projects which will have a major impact on long-term economic growth and job creation.”

“Today’s announcement means even more communities across Staffordshire including Leek, Tamworth, Rugeley and Lichfield can look forward to regeneration of their areas and greater employment opportunities.”

Cllr Mohammed Pervez, Leader Stoke-on-Trent City Council, said: “This additional investment of £7.7m in the city’s road network will enable us to bring forward a range of exciting plans to vastly improve transport links to the city centre and help Stoke-on-Trent to realise its economic potential.”

“The city is among the best-connected in the UK, and having a connected, vibrant city centre will be pivotal to achieving our growth ambitions and securing the high-value jobs that Stoke-on-Trent needs.”

“This extra funding means that, alongside the Etruria Valley Link Road project, we can also progress with planned improvements to the Leek Road city centre gateway, Â as well as crucial enabling work on the completion of the city’s ring road.”

“By simultaneously boosting connectivity and opening up key development and employment sites, these important projects will catalyse the cityâ€™s economic transformation and create hundreds of jobs and major inward investment opportunities.”