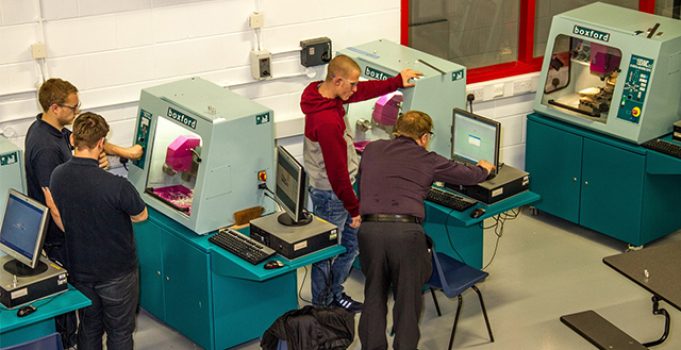 Getting enthusiastic about engineering in Stoke and Staffordshire

Businesses and civic leaders are looking at ways of enthusing young people in Stoke-on-Trent and Staffordshire about careers in science, technology and engineering to help tackle the UK’s skills gap.

The Stoke-on-Trent and Staffordshire Local Enterprise Partnership and Staffordshire Chambers of Commerce invited leading engineer Stephen Tetlow to a meeting with business leaders and representatives from local authorities to debate the problem.

Mr Tetlow, who is chief executive of the Institution of Mechanical Engineers (IMechE) and was previously director of electrical and mechanical engineering for the British Army, also visited Staffordshire and Keele universities during his day in the area.

The visit was organised by LEP board member Jonathan Dale, who leads on business growth and innovation, and who said it was important to get professional bodies, universities and businesses working together on skills.

“Events like today are what it’s all about,” he said. “If we can work together to build our area’s engineering skills that will translate into more jobs, a more highly qualified workforce and a thriving economy for Stoke-on-Trent and Staffordshire.”

Mr Tetlow told the meeting at the Staffordshire Chambers of Commerce headquarters in Stoke-on-Trent that skills problems started in schools, with 28 per cent of physics teaching posts vacant across the country.

“We have a massive wastage in schools of young people who might be excited by science and technology,” he said.

Only two boys in every 100 who took physics at GCSE went on to take an engineering degree and the situation was even worse among girls, with only one in 200 who did GCSE physics going on to study engineering at degree level.

“Overall, we are producing half the number of engineering technicians and graduates that the country needs not only to grow GDP but to replace the demographic timebomb as older people retire,” Mr Tetlow said. “Many companies are saying to us that their biggest impediment to growth is the supply of skills and we need to do something very serious about this as a country.”

Stoke-on-Trent City Council is looking to drive up the standard of maths in schools with the launch of an innovative hub to train and retain specialist maths teachers. The council announced last week that it has put in £500,000 to the scheme, which has been match-funded by the Bet365 Foundation, to join up the work of schools, colleges and universities and support new and existing maths teachers over the next three years.

Staffordshire Chambers of Commerce is planning to work with IMechE on developing a local Young Engineers Network to support young people at early stages in their careers, particularly those working for small and medium enterprises.

Further discussions are also planned on how best to promote engineering as a future career choice when families are choosing schools and youngsters are considering which subjects to take.

Staffordshire Chambers of Commerce CEO Sara Williams said: “We know that one of the worst affected areas for skills shortages is the engineering sector. It is essential that efforts are focused on attracting young talent into this sector to tackle this skills gap head-on and ensure Staffordshire’s engineering firms can grow and thrive.

“We are delighted to be working with the Institution of Mechanical Engineers to create a Young Engineers Network, so that talented young engineers are supported, developed and their skills retained within Staffordshire’s engineering businesses.”