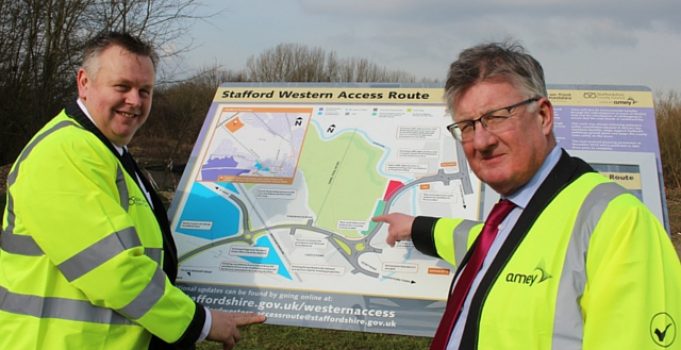 Works to support the structural design of a new road which will bring future investment to Stafford and ease town centre congestion were completed on Friday (February 26).

Trial piles were installed along one section of the Stafford Western Access Route throughout last week. This will enable the project team to draw up final designs and ensure it can minimise noise and vibration from the construction work.

Plans for the route were approved in November after the Stoke-on-Trent and Staffordshire Enterprise Partnership secured £16.1 million for the project through the Government’s Local Growth Fund.

Mark said: “The trial works have gone well with nothing unexpected which is good news. This is the first physical work on the project so it is significant. It means the team can finalise the design and explore options to reduce the impact of the main works by finding the best way to build the new road. People can see the project is now under way and we will of course continue to liaise with residents throughout the works. We can assure them that every effort will be made to minimise the impact and disruption to the local area.”

David Frost said: “The Stafford Western Access Route is one of a series of major developments that the local enterprise partnership is working with the county council on as part of our strategic plan. It will build on the continued growth taking place in Stafford; unlocking future development and giving the town the transport infrastructure it needs.”

Tree and vegetation clearance works have also taken place along part of the route near the entrance to Sainsbury’s car park. After taking on board feedback from local residents, part if the hedge along Doxey Road will be left so that it provides a screen for homes fronting the main construction works. This will eventually be removed and replaced with enhanced landscaping.

The whole scheme will be carried out in three sections – from Foregate Street to Doxey Road, along Doxey Road to include the rail bridge and then linking up to Martin Drive. Doxey Road will be realigned, a new roundabout built to replace the existing one and the rail bridge improved. New cycle paths will also be installed, along with a new pedestrian crossing on Martin Drive.

Plans illustrating these works and the project plan and timeline can be found on the project web page at www.staffordshire.gov.uk/westernaccess