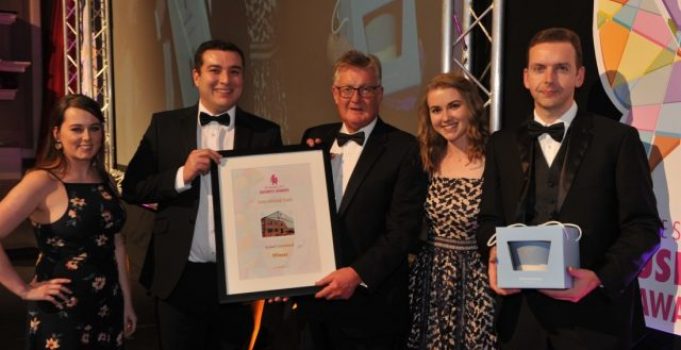 A surge in European sales has earned Newcastle-under-Lyme-based Radwell International the International Trade Award, sponsored by the Stoke-on-Trent and Staffordshire Local Enterprise Partnership, in this year’s Sentinel Business Awards.

Around 65 per cent of Radwell International’s business now comes from overseas and over the past 12 months the industrial repairs company has enjoyed ongoing success in Poland and Germany.

And that – coupled with a campaign to raise the firm’s profile at trade shows in other European countries such as France and Spain – has put Radwell International in a strong position for 2019.

LEP chairman David Frost CBE said: “Radwell International is just the kind of dynamic, outward-looking and ambitious business that our area needs to create more and better jobs and help our local economy to continue to grow.

“Our region has a strong track record in exporting across all industrial sectors, and we must continue to build on this foundation. International trade will be key to our future prosperity as the nation gears up for a new chapter in global trade relations in whatever form Brexit takes.”

Managing director Martin Keegan said: “We are in a unique position because we offer everything under one roof, unlike a lot of our competitors.

“The export side of the business is growing and that comes down to a number of things. The fact that our workforce can speak about 20 different languages between them gives us a real boost, but we have also invested time and money into translating our marketing materials – including the banners we use at trade shows – into local languages and that is working to attract new, international customers.”

Radwell International – which has recently gained its ISO9001 2015 accreditation – specialises in the buying, selling, stocking and supply of around 20 million new and surplus industrial parts and components.

Its European headquarters, which is based in Lymedale Business Park, opened in 2011 and now boasts a workforce of around 130 staff. Over the next few years the company has plans to open branch offices in Germany and Spain.

But while Radwell’s reach extends to more than 160 countries, the business is also dedicated to the community where it operates – and where 95 per cent of its staff live.

Last year, the company raised almost £5,000 in aid of its charity of the year – North Staffordshire Mind, which supports people with mental health issues. In the summer a 10-strong team completed a sponsored midnight walk up Snowdon, which raised around £3,000 alone, and a few months later another group of staff took on the Stafford Tough Mudder challenge.

Marketing assistant Rosie Crowther said: “As well as our charitable contributions, we also believe it is important to support local businesses and schools. We are part of the Young Enterprise scheme where we go into schools and colleges and act as business advisors to young people.”