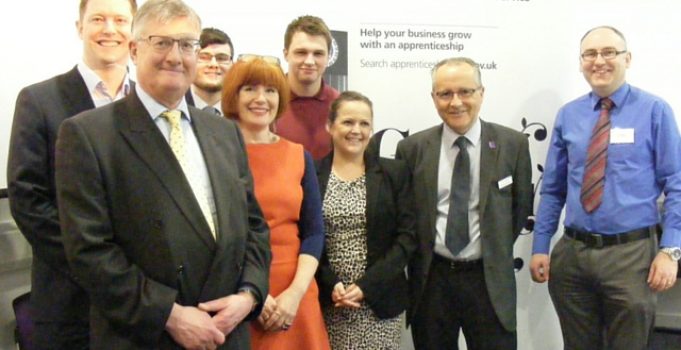 Apprenticeships in spotlight at Stafford event

Businesses will have greater power to shape skills training to meet their needs as part of a shake-up of the apprenticeships system, a meeting in Staffordshire heard this week.

The Skills Funding Agency and Skills Staffordshire invited employers from across Stoke-on-Trent and Staffordshire to an event at Entrust’s offices in Stafford giving them up to date information on the Apprenticeship Levy, which will be introduced next year.

John Myers, head of employer and delivery services at the Skills Funding Agency, said the changes, which support the government’s aim of creating three million apprenticeships by 2020, would “transfer the power” to employers by giving them control over apprenticeship funding, empowering them to get what they needed from training providers.

“It is your money and you should be demanding the best value and best quality in apprenticeship training,” Mr Myers told the audience of 100 representatives from local employers and training organisations.

The conference was chaired by Stoke-on-Trent and Staffordshire Local Enterprise Partnership chairman David Frost CBE, who stressed the importance of apprenticeships gaining a reputation for top quality training and becoming “a gold standard route into employment”.

“If people see something that is a low-value, low-level qualification they won’t take it on board, Mr Frost said.

“An apprenticeship has to be a high standard, good programme of training, and that encourages me about the potential of the new system.

“If we are going to boost the economy it is really critical that we embrace the apprenticeships agenda.”

He also called for more work with secondary schools to inform pupils about the wide range of apprenticeship options available to them.

The event also featured the opportunity to speak to a panel of experts on apprenticeships.

The Apprenticeship Levy will be introduced in April 2017, and will apply to firms with an annual pay bill of over £3 million, meaning that under 2 per cent of UK employers will be liable for the levy. The 5 per cent levy, topped up with a contribution from the Skills Funding Agency, will be returned to the employer in a digital voucher account to be spent on apprenticeships, either for new recruits, or to improve the skills of existing staff.

The government is set to announce further details of about the changes in apprenticeships during 2016, and another meeting is planned in Stafford in the summer to keep local employers up to date with the changes.

More details on apprenticeships are available at www.gov.uk/take-on-an-apprentice or by calling the National Apprenticeship Service on 0800 0150 600.